Historic Portland Works Preserve the Past (with a new roof) 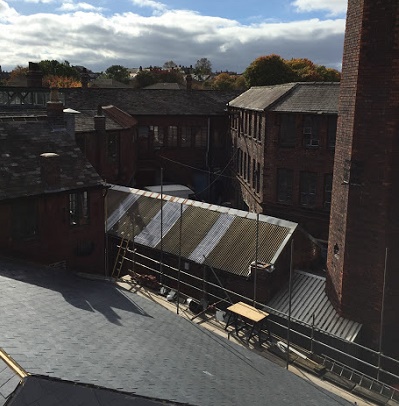 Almost getting locked in our Sheffield Depot Yard didn’t prevent Richard Abrahams from purchasing the slate for the latest part of his roof repairs on Portland Works from Burton Roofing Merchants. His decision was based not only on “the best price, but also the really good advice” he received that Saturday morning earlier this year.

Portland Works has Grade II* Listed Building status (seriously rare!) And we are very proud to have been involved in such prestigious renovations.

Sheffield is known throughout the world for steel manufacturing which had it’s beginnings in the 15th Century cottage industry formed along riversides by craftsmen, known as ‘little mesters’ who obtained power from waterwheels.

Portland Works is one of the UK’s most important historical industrial buildings having been built in the late 1870’s possibly as the first purpose built metal trades factory and is also famed for having an important role in the development of stainless steel.

“Portland Works is an important survival which demonstrates the layout of such a complex, highlights the limited use of power in the cutlery manufacturing process, and retains both hand forges and steam grinding rooms, extremely rare survivals of building types related to specific processes”, English Heritage Listing 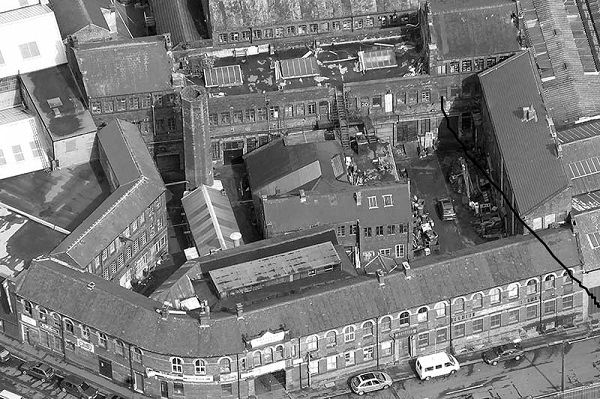 After suffering 50 years of neglect, Portland Works was purchased in 2013 by a social enterprise with funds raised from community shares and a loan from the Architectural Heritage Fund. This loan had to be paid back with a commercial mortgage that was only possible once the roofs were watertight. Richard Abrahams Roofing has been busy with repairs to the vast slate roof “on and off for the last 5 years” and permanently for the last year after the works benefitted from a Heritage Lottery fund grant and his enthusiasm for this special place and his craft is infectious. 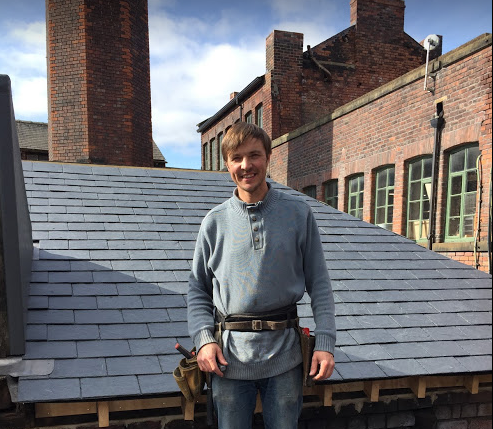 The forge in the centre of Portland Works, which still makes hand forged tools using a lot of the original equipment, needed a re-roof. The decision was taken to replace the dilapidated felt and return it back to a slate roof which required consultation with experts and Listed Building Consent. A lot of the stripping work had to be done in the evenings to allow business to continue as usual during the day.

The forge roof needed re-raftering, it was boarded with 12mm softwood ply and TyveK Supro Felt

When it came to choice of slate it had to be the CUPA 18 from Cupa Pizarras, a grey slate from the Spanish province of Lugo. It has a riven edge, textured finish and almost no visible pyrite which gives it a more ‘rustic’ natural finish. It was the slate suggested by one our experienced sales team as an excellent match in terms of character to the type of slate that would have originally been on this building. They are also the exact size as the originals. Richard tells us he has been working the H18’s on site because they aren’t the same uniformity as other slates, but that makes them perfect for this industrial building.

The forge fan housing has been GRP’d with Cure-It and the roof will be finished with black glazed Marley Angle Capped ridge tiles.

Work has also included lead stepped flashing and a back gutter behind the fan housing. Richard tells us that he “went on the training with the Lead Sheet Training Organisation, their – Introduction to Welding and Bossing and I’d really recommend it to anyone”.

"The building was built as a cutlery factory in the late 1870s, but today houses over 30 small businesses. When the building was bought in 2013 the plan was to reverse the decades of neglect which we are slowly doing, and to make the building a more welcoming environment for our tenants and visitors." Donna Bate, Building Manager

If you’ve got a heritage project coming up and need specialist roofing advice, please give us a call. Our knowledgeable staff are always happy to help.