How much is your favourite TV show home worth? 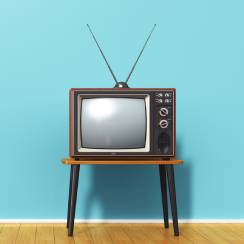 Gone are the days of waiting for the same night each week to catch up with our favourite TV programmes. More and more of us are binge watching our must-see shows, meaning we often spend more time watching our favourite characters than with our actual loved ones. How many nights a week have you caught yourself endlessly watching your new favourite show only for it suddenly to be midnight and you need to be up for work at 6am?

You’re not alone! Plus, it seems as though it’s not just the characters that keep bringing us back for more; certain locations and properties are becoming almost as important!

While we all may have wondered about what it would be like to live in these sometimes far-flung locations, exactly how much would it cost to purchase six of the most recognisable TV homes? At Burton Roofing we dug a little deeper to find out!

We set out and created floorplans of these famous TV homes to help us compare them with more modern properties on the market today, in order to see just how much they would cost to buy in 2019. Our findings will certainly intrigue you. 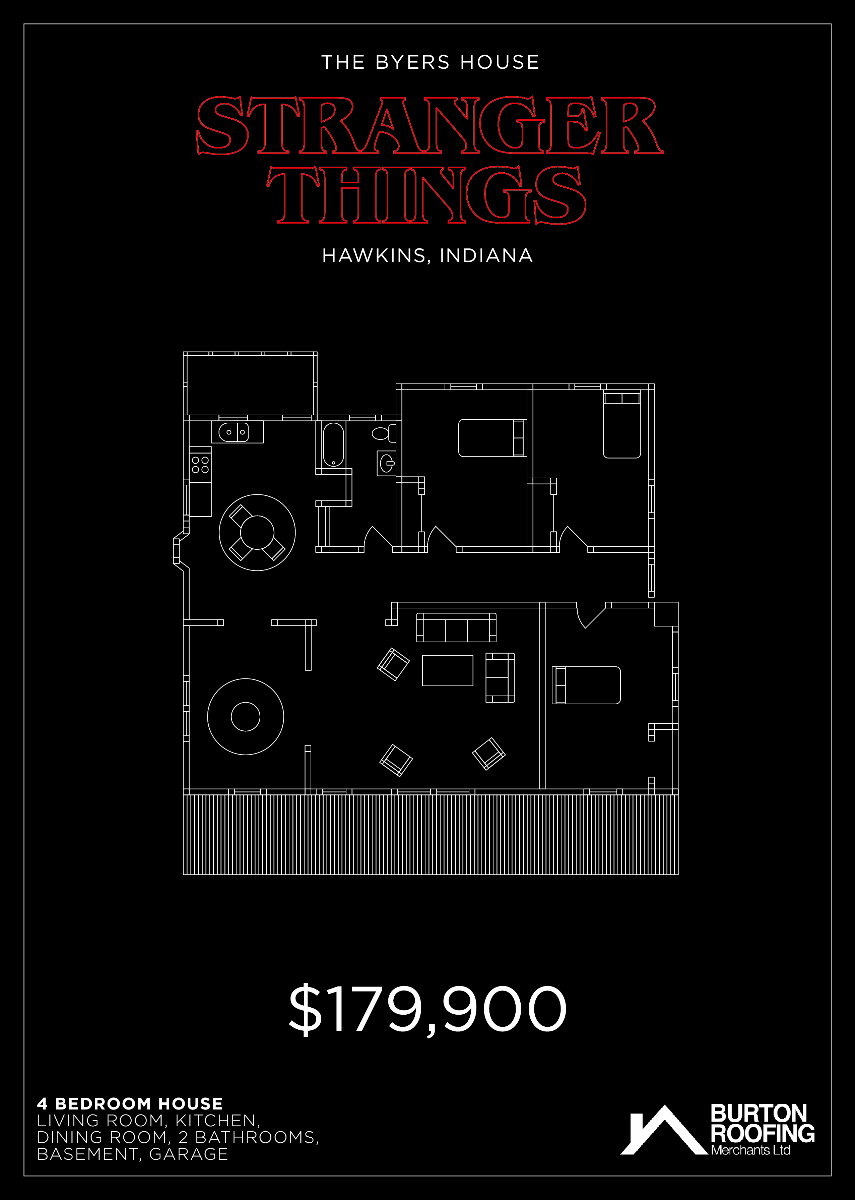 If you’re into Sci-Fi and having your mind boggled, then Stranger Things will be right up your street. This intense Netflix original drama centres around a missing 12-year-old boy and his family and friends who set out to find him – with some mysteries, government experiments and supernatural forces intertwined along the way.

The family home featured in all the series so far is a four bedroom detached house with a living room, kitchen, dining room, two bathrooms, basement and a garage. It comes in at a modest $179,900 or £140,322.00. Not bad for all the space on offer, although it may need updating! 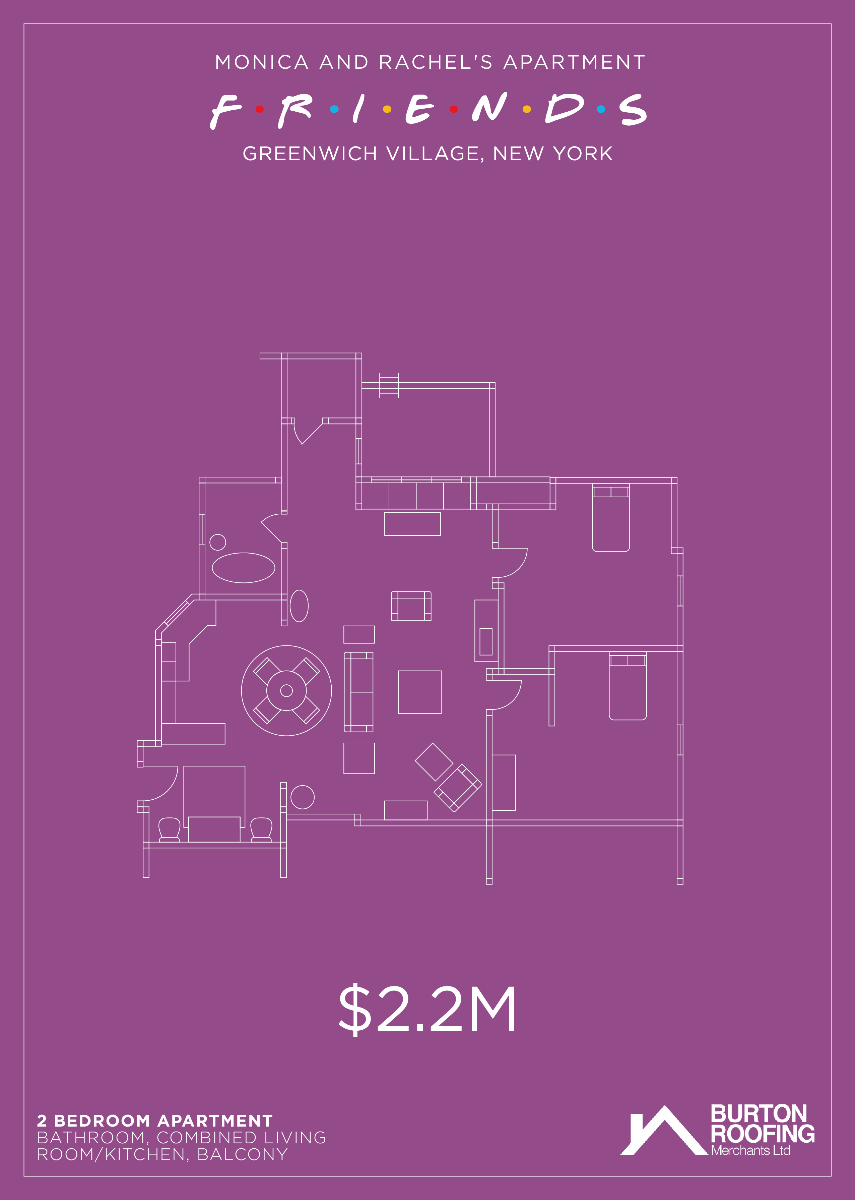 The show we all know and love. For those who haven’t seen it (where have you been?), Friends is an American sitcom about six best friends, four of whom live in the same apartment block, facing life and love in the Big Apple.

Monica and Rachel’s apartment features heavily across all 10 seasons and boasts two bedrooms, a bathroom, combined kitchen and living room and a balcony. Because of its incredible location, in today’s market it would be worth a staggering $2.1 million or £1.69 million. 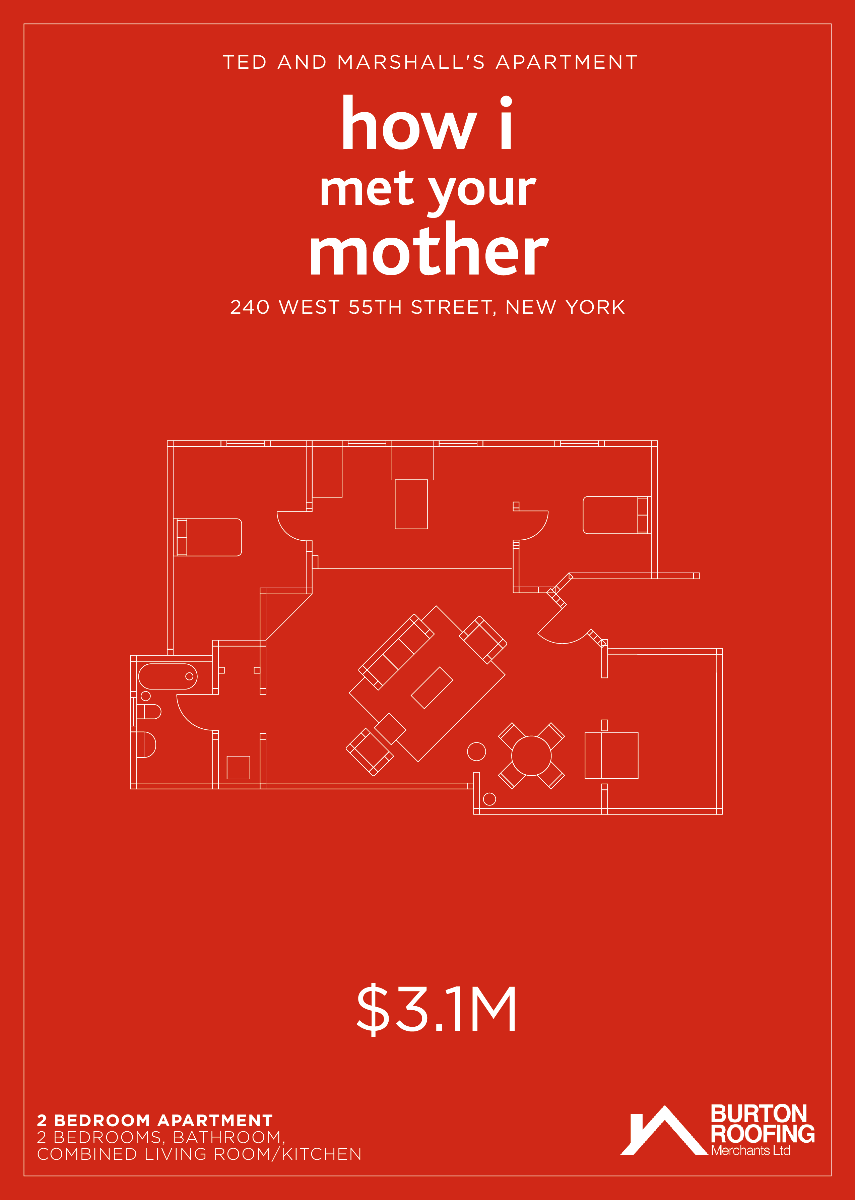 Have you met Ted? This American show follows Ted Mosby’s journey to find the mother of his children in the form of flashbacks, and the events leading up to that moment. Filled with humour and dramatic moments, we spend much of the series with the couples in Ted and Marshall’s apartment.

Their home is not one to be sniffed at and includes two bedrooms, three bathrooms and a large combined kitchen and living space. The apartment situated on 55th Street in New York comes in at a whopping $3.1 million or £2.4 million. 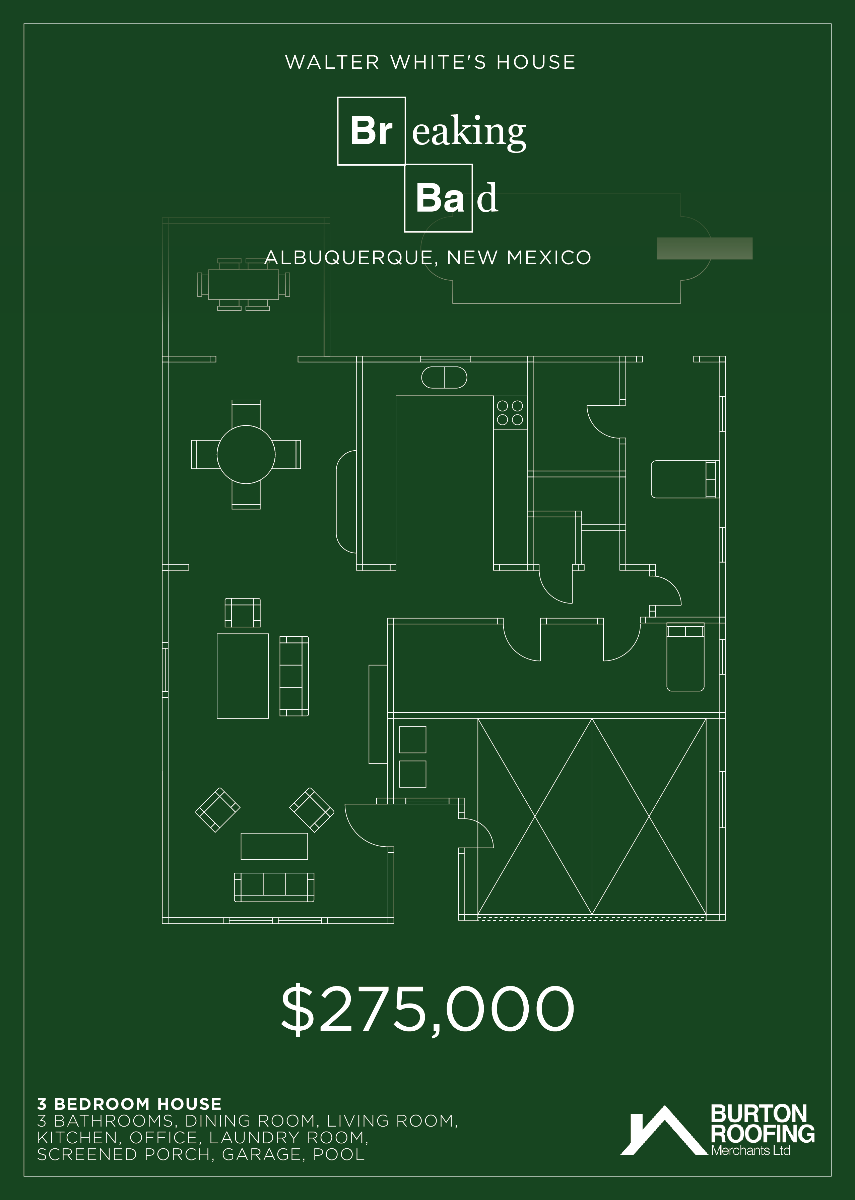 This nail-biting show follows the mild-mannered high school chemistry teacher Walter White who learns he has terminal cancer. His wife has just given birth, his son is living with cerebral palsy and his salary barely pays the bills. So, in a bid to make money, he turns to making the drug methamphetamine in the back of an old RV.

Their seemingly modest detached family home has three bedrooms, three bathrooms, dining and living room, kitchen, home office, laundry room, porch, garage and even a pool. For a reasonable $275,000 or £214,500 this property could be yours! 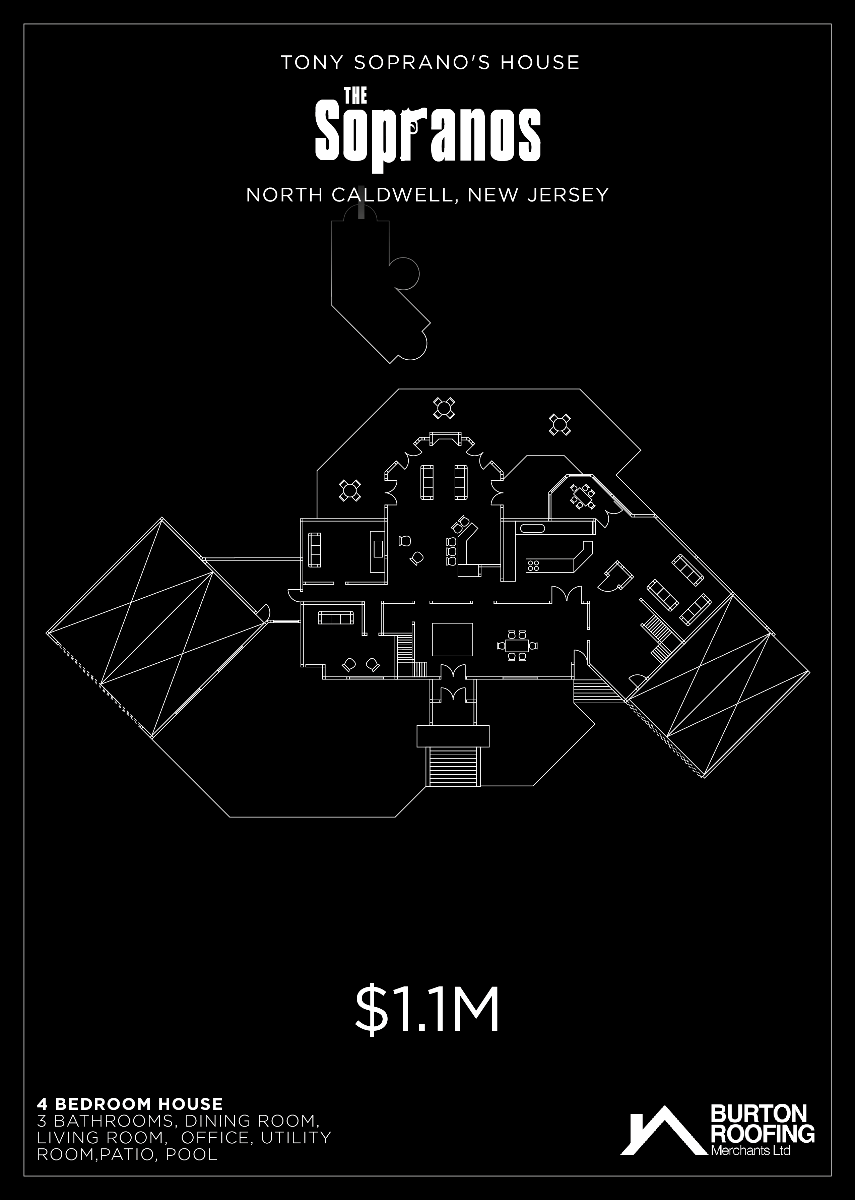 Battling family life with his second family (the mob), the show sees main character Tony Soprano try to deal with his professional and personal problems with the help of therapy. This jam-packed drama series is full of power struggles, affairs, violence and betrayal.

The sprawling four bedroom family home includes three bathrooms, dining and living room, office, utility room, patio and a pool for $1 million or £849,420. (Cash to be deposited in a briefcase). 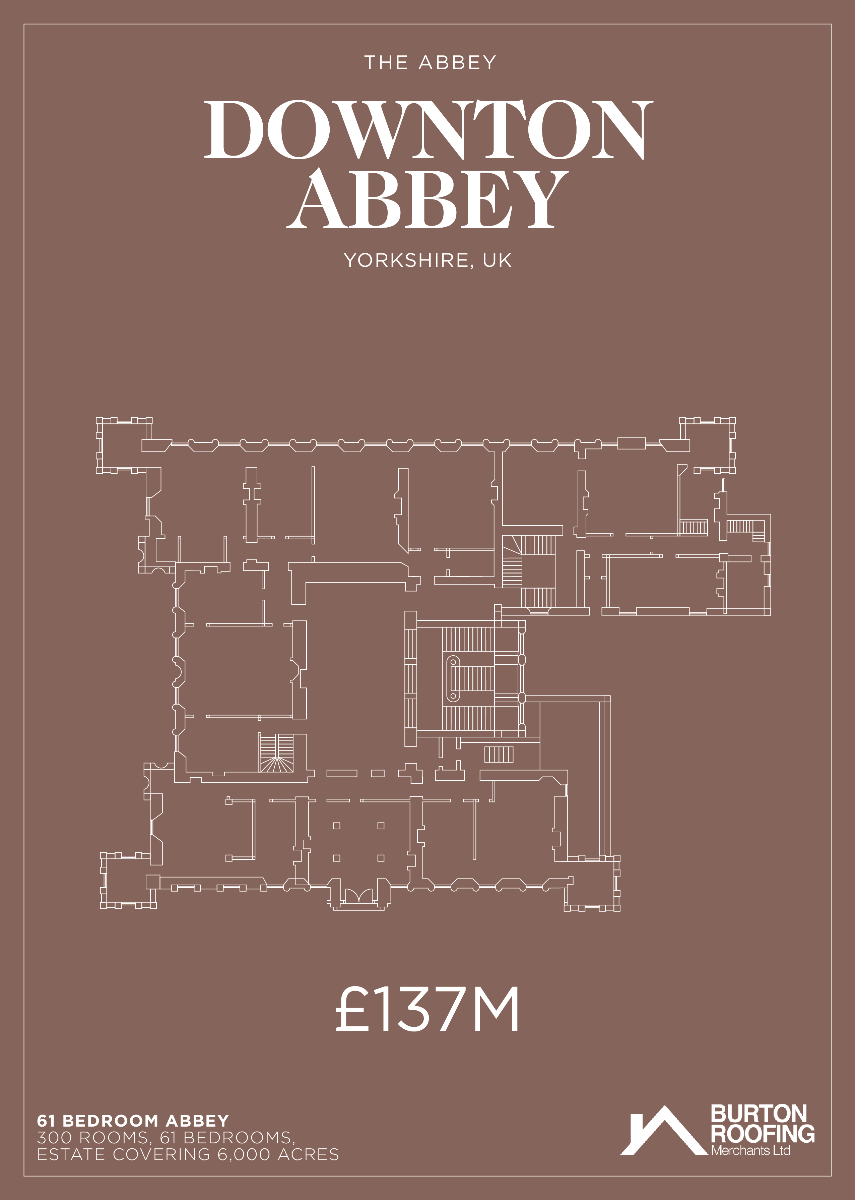 A historical British drama series centred around the Crawley family who live in the impressive Abbey. Beginning in 1912 with the sinking of the Titanic, this historic event leaves Downton Abbey’s future in jeopardy, as members of the family tragically die aboard the ship.

This beautiful property with its traditional décor, sprawling rooms and jaw dropping windows is worth an eye-watering $173.9 million or £137 million, and boasts 300 rooms including 61 bedrooms and a plush estate covering 6,000 acres.

Which one would you choose?

While the money you would need to purchase a 2019 version of these classic TV show homes may be out of reach for the majority of us, we can always take inspiration from our favourite properties and locations when looking to make upgrades or changes to our own homes. Whether you take the quirky furnishings from Monica and Rachel’s apartment or upgrade your windows to a Downton Abbey-inspired style, you don’t need to spend a fortune to create the home of your dreams.