Are you a Star Wars fanatic? Ahead of the upcoming release of the final chapter in the Skywalker saga ‘Rise of the Skywalker’, many of us will be imagining what it would be like to live in a galaxy far, far away…

Here at Burton Roofing, we decided to take our visions a step further. We priced up some of the most iconic structures from the franchise to understand how long it would take to build your favourite Star Wars’ homes, and how much it would cost to do so based on real-world methods and materials.

From the Millennium Falcon to the Ewok village, here’s what it could take to rebuild the galaxy. 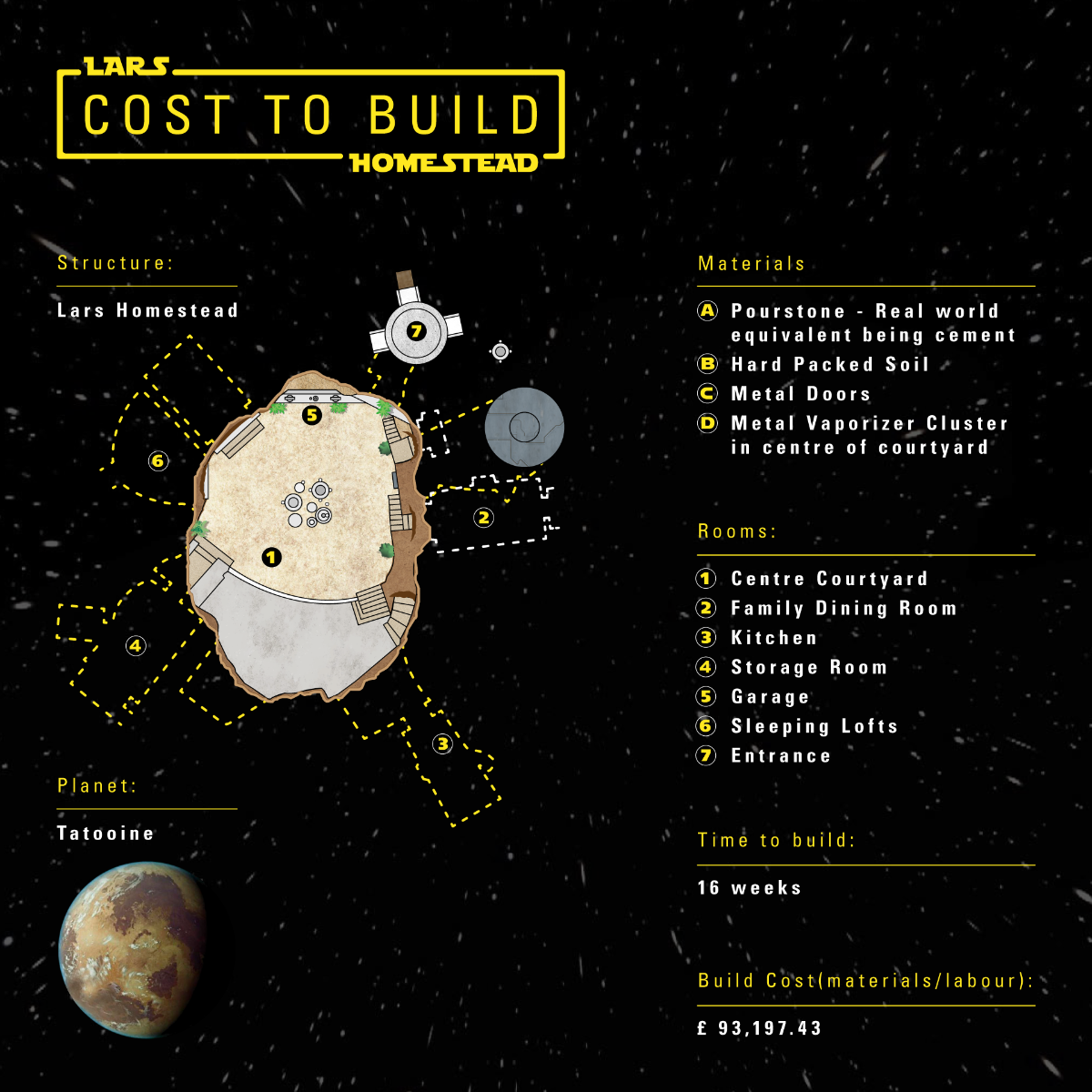 The childhood home of Luke Skywalker himself, the Lars Homestead is an igloo-shaped moisture farm on the planet of Tatooine. The property is featured on Episodes II, III and IV – and could be all yours for just £93,197.

For that price you’ll have access to no less than 63 vaporators and a spacious main living pit with links to various rooms, lofts and outdoor areas. It’s secure too, with an external access keypad available to help you screen your visitors.

And with inner walls composed of hard-packed soil and laced with magnetic ore, you’ll be insulated against the Tatooine’s twin suns and chilly night-time temperatures.

We mapped out the homestead to find the square footage, then costed up the build based on the number of rooms and the materials used. You could move in within just 16 weeks when factoring in construction lead times. 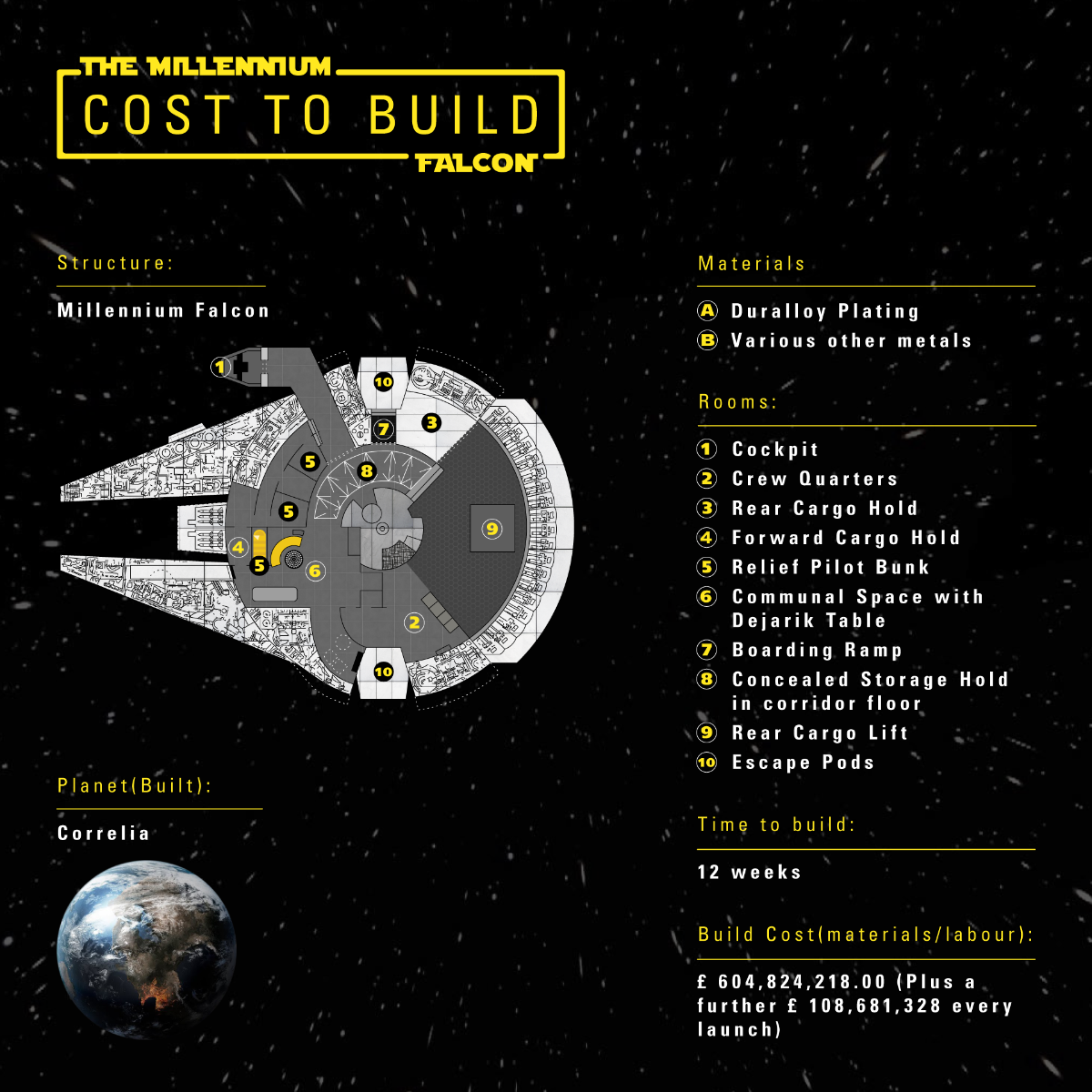 The iconic Millennium Falcon is the fastest vessel in the Star Wars galaxy, and that kind of technology doesn’t come cheap. Rebuilding this starship will set you back £604,824,218 – plus a further £108,681,328 for every launch!

It’s a showstopper nonetheless, and features in a grand total of eight of the films. You’ll step foot in the shoes of Han Solo and Chewbacca as you take control of its renowned hyperdrive capability, granting speeds of up to 1,200kmph in atmosphere and 3,000G in space.

There’s its extensive weaponry too, including laser cannons, missile tubes and a blaster cannon to help you defend your property when on the ground. Your crew quarters and numerous cargo holds will be protected all the while by Duralloy plating and three deflector shield generators.

While the idea of building your own may seem out of this world, Elon Musk and SpaceX effectively did just that with the Falcon Heavy rocket. We scaled up the costs and timings to match the costlier YT-1300 light freighter – which could be ready for launch within 12 weeks. 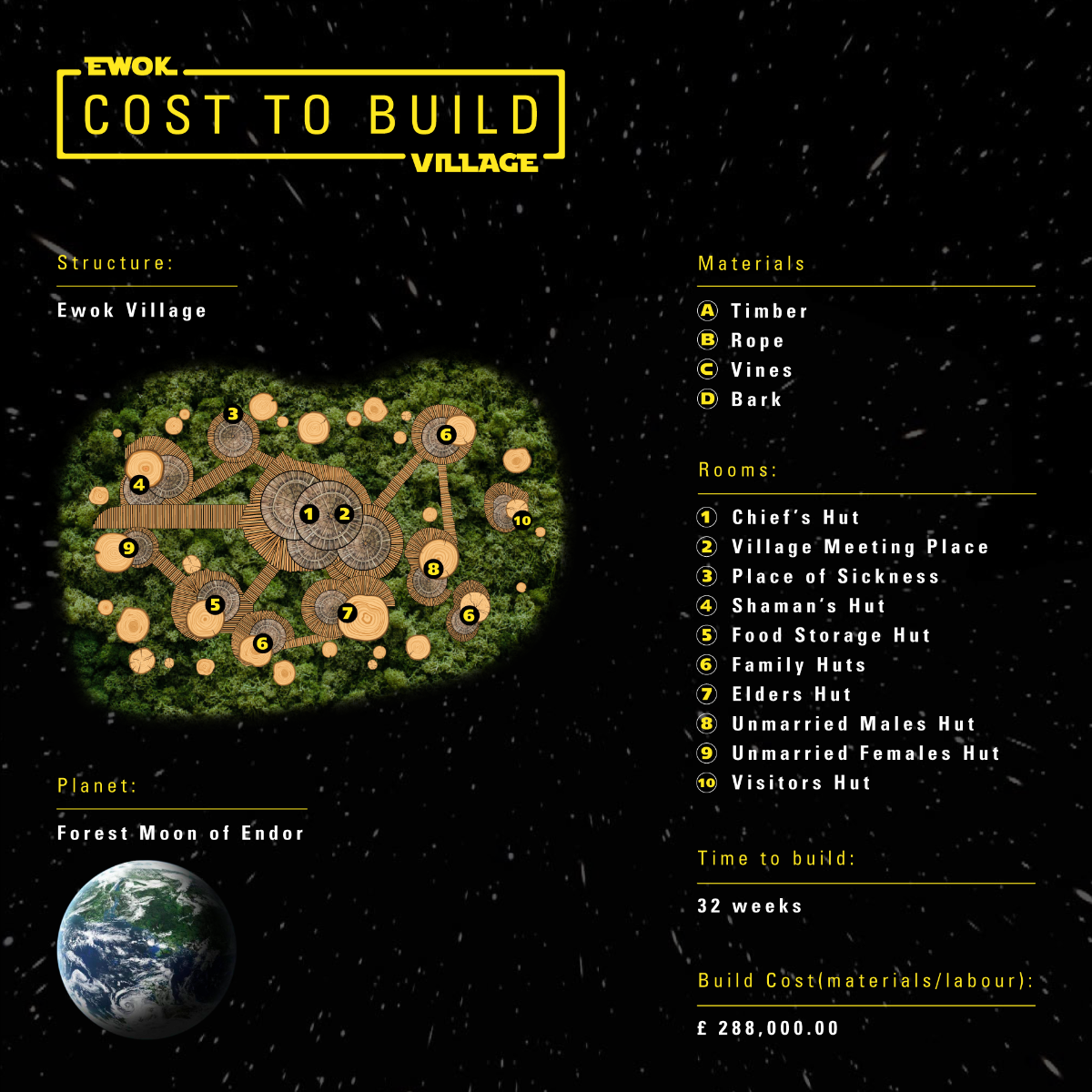 Back at the more affordable end of the spectrum, you could recreate the Ewok village found on the Forest Moon of Endor for approximately £288,000 including materials and labour. You’ll need to use the right tools and accessories to carefully construct the 16 thatch-roofed wooden huts in the trees – plus several interconnecting walkways.

The village features plenty of communal areas and lookout points plus a medical centre and spaces for food storage. The homes themselves are cosy and inviting, with cooking fires located in the centre and sleeping mats stacked in the lofts above.

You’ll be further protected by the fire-resistant and insect-repellent bark of the surrounding conifer trees – which could also come in handy if you need to fashion any spears, bows or other useful pieces of equipment.

We priced up the treetop village by mapping out the number of huts, connecting bridges and rope ladders. Completing a project of such scale will take you around 32 weeks, but your tribe are guaranteed to appreciate your efforts. 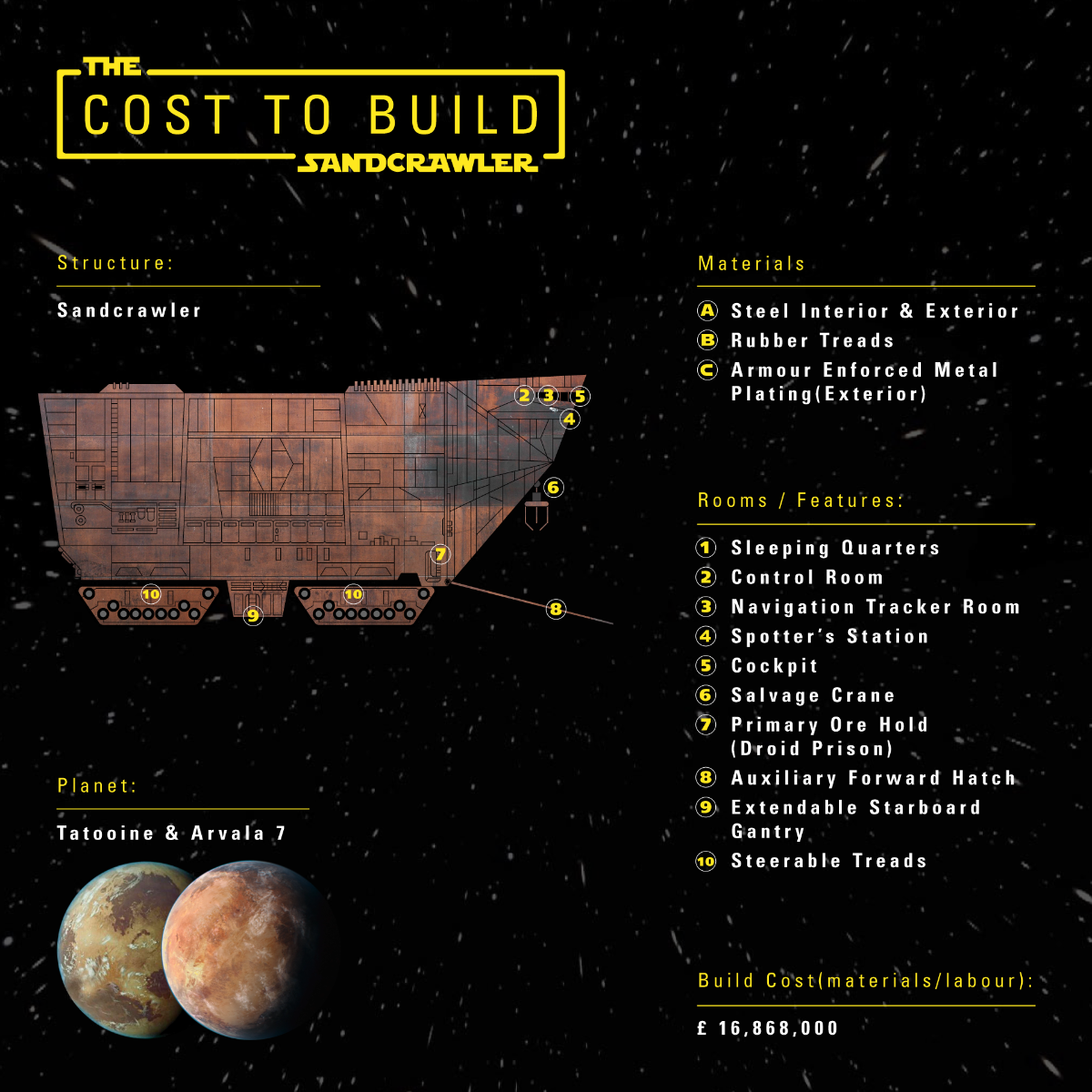 Looking for a little more protection on the go? With its large treads and armour-plated exterior, the Jawa’s Sandcrawler fits the bill perfectly. The bill itself, however, is hefty - the tank-like structure comes in at £16,868,000 all in.

The Sandcrawlers are seen in episodes I, II and IV traversing the landscapes of Tatooine and Arvala 7 in The Mandalorian series. Inside are sleeping quarters, a control room and other areas – though communal spaces are somewhat limited. Who needs friends when you’re inside a fortress on wheels?

Building your very own Sandcrawler will take around 32 weeks from start to finish. We scaled up the process of building a Challenger 2 battle tank to accommodate the larger size and extra machinery and work out the costs of a scavenger’s life on the road.

Which structure would you choose?

Can you see yourself settling down in an intergalactic starship? Is the Sandcrawler a little beyond your budget? Whatever type of roof you choose to keep over your head, here at Burton Roofing we’ve got you covered!