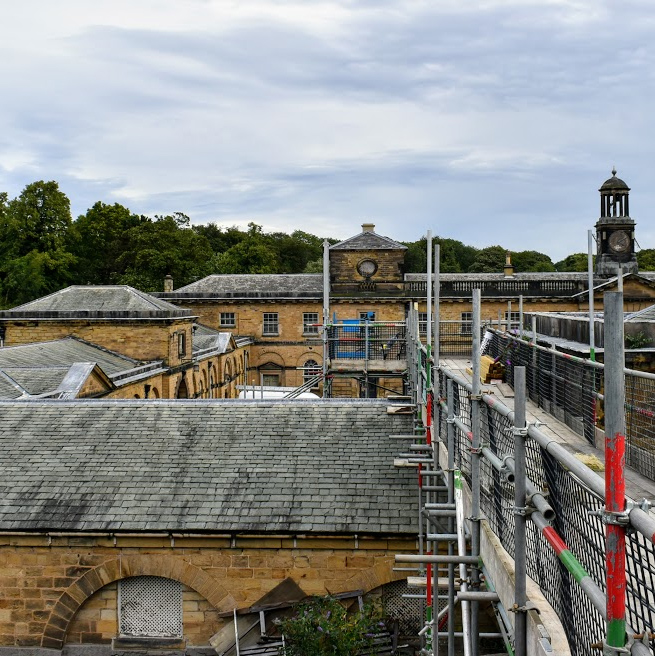 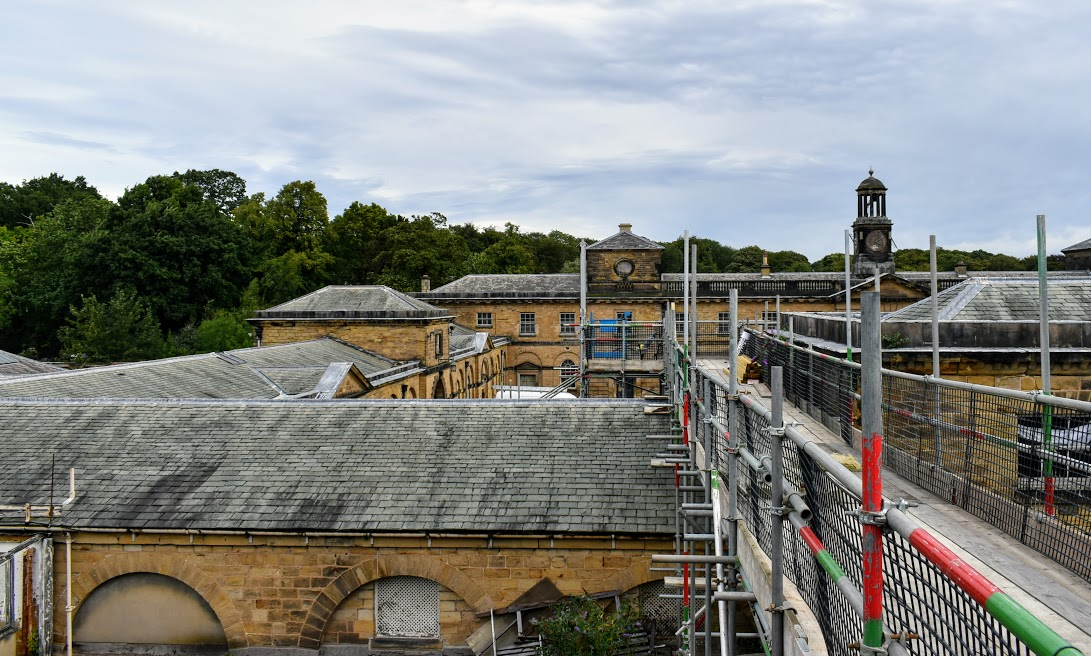 Built between 1725 and 1750 and Grade I listed, Wentworth Woodhouse was purchased for £7million by the Wentworth Woodhouse Preservation Trust in 2017, following a five-year campaign with SAVE. Its Grade I listed stables and riding school were built from 1766 and the riding school roof is being repaired as part of a major restoration project undertaken by who Aura Conservation specialise heritage restoration and builds. The company’s Contract Manager Dave Anderson recently invited us to visit the prestigious project and witness how our roofing materials are being used. 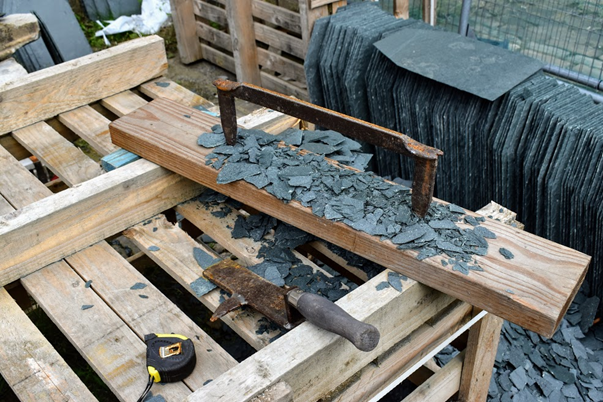 The original Westmorland slate tile, thick textured with beautiful green hues, were attached with oak pegs. They are being replaced ‘like for like’ with Burlington’s Slate from Cumbria which has been shaped and holed using traditional tools, including the bench iron and slaters’ axes, before being attached with BRM’ copper nails. Wherever possible the old slate will be reused on site. It’s estimated 75% of the original slate can be salvaged. 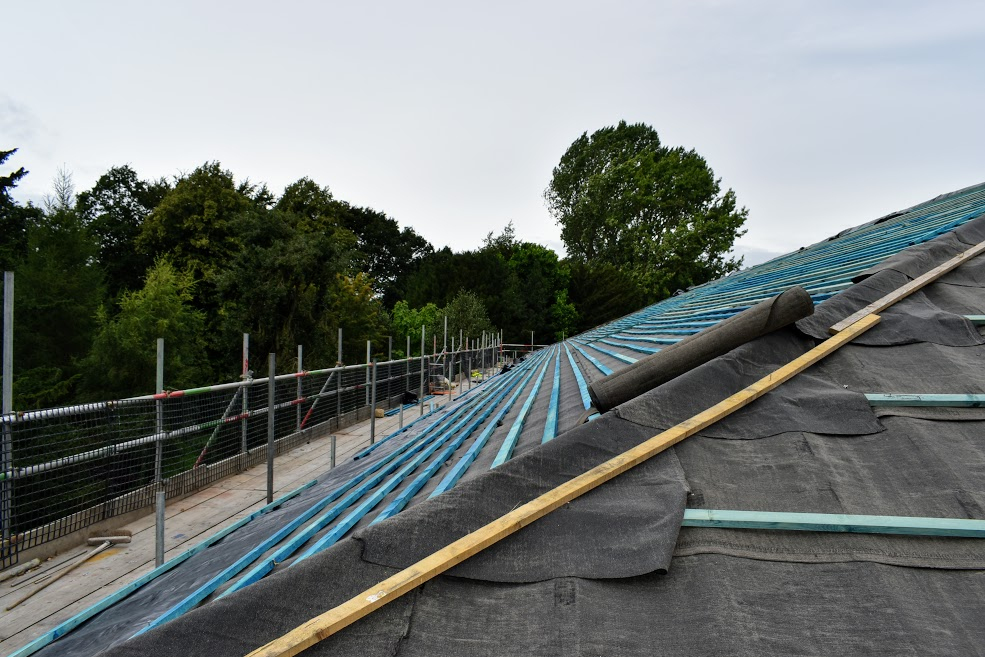 Natural England always specifies 1F roofing felt. Bats can get tangled in the membrane of modern breather felt. Even when no bats are found to be present, breather membrane is considered to be a potentially fatal future trap. 1F felt has a rough surface which bats can grip on to. This tried and tested underlay is the only material currently recommended by the Bat Conservation Trust. Simple to install and heavy enough to help prevent wind uplift, this hessian weave bitumen felt is still manufactured in virtually the same way as it was 100 years ago.

During our visit we couldn’t pass up the opportunity to take a mansion rooftop tour and see roofing restoration in action. The roof repairs form Phase 2 of the current repairs programme and are being undertaken by the Woodhead Group. The guided tours are accessible via 135 steps (or a lift). We saw the four acres of roofline and three different styles of roof from the different stages of the house’s history. The views over the park and surrounding countryside are spectacular. Our guide talked us through the history of the building as skilled roofers and masons worked away. Here are a few details our roofing customers might appreciate:

A Palladian style house which is more like a palace, Wentworth Woodhouse has the longest frontage in England. Some 700 tonnes of scaffold have been used for the roof works - that’s 52,000 m of pole which, put end-on-end, would be 5.5 times higher than Mount Everest. All scaffolding is stress-tied as nothing can be secured to this breath-taking building. 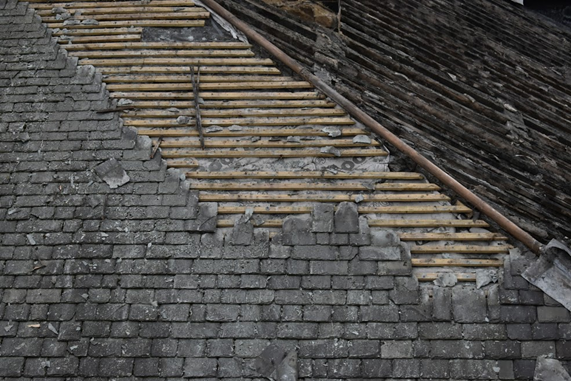 The original slate for the house came from the Langdale Quarry in the Lake District. As it was extremely difficult for large quantities to be transported over the Pennines in the 1700s, it could have been transported via Coniston Water and loaded onto ships, which travelled down the Irish Sea, around Cornwall and up the English Channel into the Humber.

Felt would obviously not have been in use when the main house was originally roofed in 1720. Its evidence reveals that sections have been re-roofed fairly recently. Roof timbers were made of English oak and pitch pine. The latter is used to waterproof ships because the sap produced by the timber acts as waterproofing. 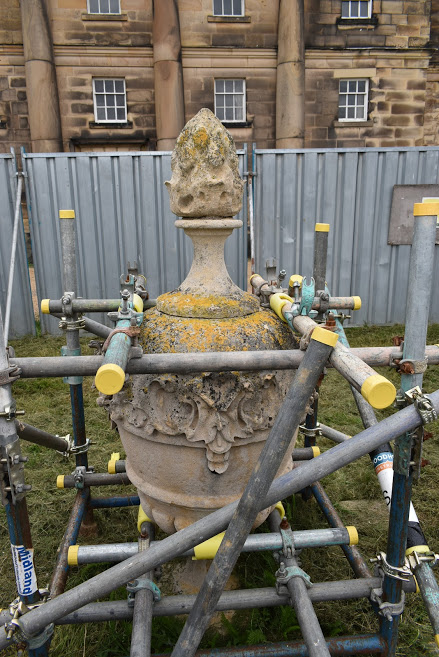 Stone urns topped with pineapples are among Wentworth’s many decorative rooftop features.

A symbol of wealth, welcome and hospitality, pineapples were grown at Wentworth Woodhouse by the Fitzwilliam and Rockingham families who rented them out!

The 19 urns, each weighing 600kg, have been carefully brought to ground level for restoration, which is going to cost in the region of £8,000 each. 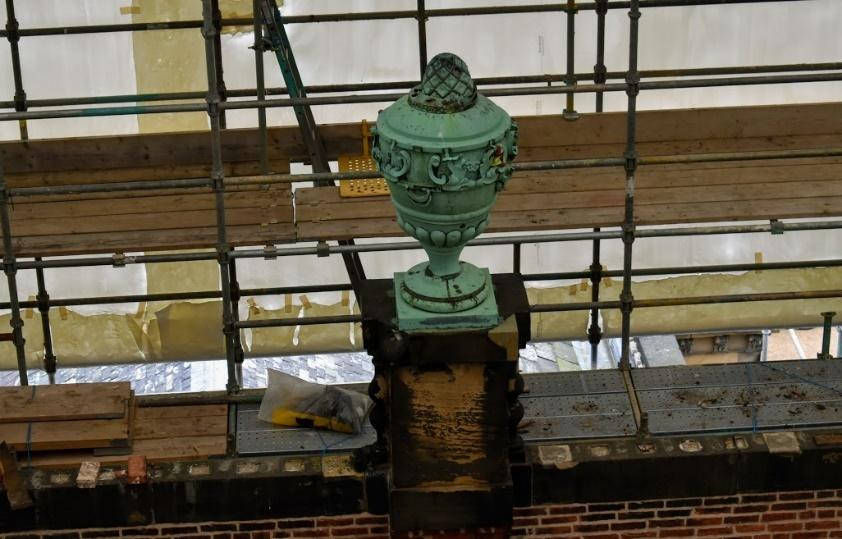 One of the many ornate chimney pots

The house has 200 chimneys and burnt through 6 tonnes of coal a week in its heyday… which probably didn’t matter if you owned a coal mine!

The roof of Wentworth Woodhouse may be disappearing fast, but there’s still a last-minute chance to Make Your Mark on it…

The Make Your Mark In History Appeal which enables supporters to sponsor a new slate, destined to be laid over the Grade I listed mansion’s grand state rooms, for a suggested donation of £50 is now running until the end of October.

Rooftop tours can be booked at https://wentworthwoodhouse.org.uk/news/rooftop-tours/